Pick-up from hotels or accommodation in Kraków.

Auschwitz I Main Camp was founded 27 April 1940.  However the real hell started 14 june 1940 when the first transport with over 700 people polish political prisoners and polish jews arrived at the camp. From then on Aushwwitz became the site of gradual extermination by inhumane living conditions, physical destruction of the prisoners. It was the biggest site of the physical extermination of the jews. The fences, barbed wires, watchtowers , barracs, gallows, gas chambers and crematories all depict the circumstances under which the nazi genocide in the Auschwitz concentration and death camp took place.

Birkenau – In 1941 dueto the decision of Heinrich Himmler the camp Auschwitz II –Birkenau was created, it was situated about 3 km away from Auschwitz I. Birkenau extends on over 140 hectares. On that land more than 300 buildings of different types have been built: barracs, latrines, watchtowers, gas chambers etc. During its 3 years of existence it has fulfilled different functions: its construction started October 1941 as a camp for around 125 00 prisoners of war. It was launched in March 1942 as a branch of KL Auschwitz fulfilled simultaneously the function of a death camp for jews.

In the museum you can see the platforms on which the selections were held, crematories, barracs tat serve as sites for the expositions. In the museum you will also have a chance to see the private belongings of the prisoners, items stolen from the deported jews, pictures, proves of crimes left by the perpetrators. Apart from it you will see models, sculptures, prisoners’ clothes, bunk beds that they slept on as well as other object used by the inmates.

It was good, although they did not deliver the leaflets individually in the requested language, but in two, and that was not what was agreed. The subtitles of the video were not in the language we had said. Spanish.

Very knowledgeable guide on the coach and nice and simple to find the pick up point!

Alix , United Kingdom Helpful?
February 16, 2020
We had an amazing trip

We had an amazing trip to auschwitz, the bus company was on time the bus operater/guide was extremly helpfull and knowledgable and the bus journey was fab. It was all very well organised. We will defiantly be using these again.

Victoria , United Kingdom
February 15, 2020
It was a breath taking experience both

It was a breath taking experience both Auschwitz and Auschwitz-Birkenau, the travel/instructor/driver & documentary video on the way to Auschwitz was 10/10 I couldn’t of asked for a better service then the one I had received.

The ideal tour to do if you’re wanting to visit and look around at your own pace without a guide. We were picked up at our meeting point and had Poul as our bus guide who gave us some interesting facts along the way and also played a documentary film which lasted for most of the journey (takes about 1.5hrs from Kraków) We had 2 hours at Birkenau and then a quick 5 min drive to Auschwitz l where we had another 2 hours. A really sad but eye-opening place to see if you’re visiting Kraków!

I booked this trip the day before we was due to visit Auschwitz and we were so pleasantly surprised by the whole experience. The tour guide was really friendly, he gave us plenty of information on our way to both camps and showed us a short film about the camps too. The time at each camp wasn’t rushed, they gave us 2 hours for each and that was plenty! We didn’t feel rushed nor did we feel like we had to kill time. He also gave us extra information about the general history of Krakow on the way back from the camps. All in all a very good tour that I would definitely recommend.

We will pick you up from your hotel in Cracow.  The visit of Auschwitz I takes around 2 hours. We need to take a free entance tickts so plese prepade yours ID or passport for verification purposes.

Afterwards, you will have a short 15 minute break before visiting Birkenau which takes about 1 hour.  Then we come back to Cracow to your hotel or any other place in downtown Cracow.

The drive from Cracow to Auschwitz takes about 1,5 h. You will travel in a comfortable and air-conditioned van.

In Auschwitz you can take pictures free of charge.

If you prefer a different schedule of the trip get in touch with our reservation department and we will organize a private trip for you.

Know before you go :

Please bring your ID or passport for verification purposes

• Please note that large backpacks and handbags are not permitted in Auschwitz Birkenau Museum. Maximum bag size is 20 / 30 cm
• Time of pick-up can be changed – you will be informed by mobile phone, email or through the reception desk
• Please inform the tour operator if you have a small child requiring a car seat
• Please note, you will need to show your student card at the desk if you have booked the student ticket
• You are advised to bring a packed lunch to save time, although there is a place to buy snacks
• Please note, this is a group tour. It is not private
• Please note, in exceptional cases, the minivan might be replaced with a bigger bus, with very similar comfort 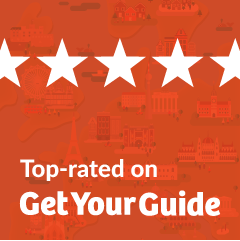